Home » GENERA E-F » Ficus » Ficus glumosa figlets
Back to Category Overview
Total images in all categories: 11,544
Total number of hits on all images: 6,625,986 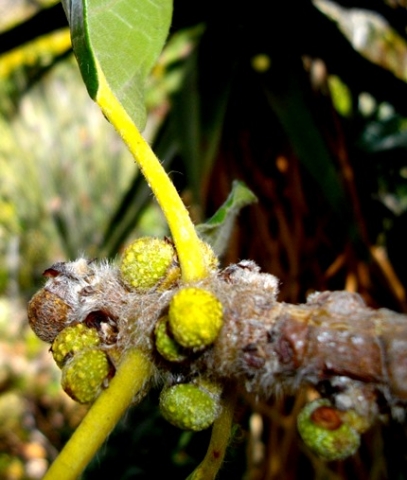 Ficus glumosa, commonly called mountain fig or hairy rock fig and previously known botanically as F. sonderi and F. montana among other names at different times, is a small to medium-sized, rock-splitting tree of heights between 5 m and 10 m (SA Tree List No. 64). It occasionally grows a very large crown, rounded or open and taller than 15 m. The young shoots are conspicuously hairy.

The small, stalkless figlets grow in pairs from leaf axils near the stem-tips of small branchlets, sometimes in clusters. These hairy figs have irregular pale spots upon their initially green surfaces that turn yellowish and finally red or pinkish red as they ripen. Fig size varies from 8 mm to 1,5 mm, to some extent according to region in the species distribution, smaller on Namibian trees. Many animals and birds eat these figs.

The species distribution lies in the eastern parts of South Africa from the Eastern Cape to Limpopo, as well as in Namibia, Zimbabwe and further afield in tropical Africa as far as Senegal and even the Yemen.

The tree grows in bushveld, often on rocky hills, along seasonal watercourses and in generally dry woodland. The species is not considered to be threatened in its habitat early in the twenty first century (Coates Palgrave, 2002; Pooley, 1993; Schmidt, et al, 2002; Van Wyk and Van Wyk, 1997; www.redlist.sanbi.org).