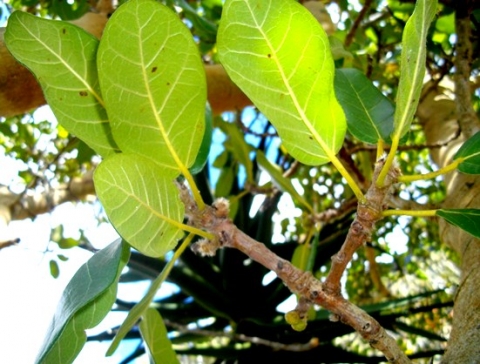 The stiff, thick textured, simple leaves are ovate or elliptic to nearly rounded in shape. Leaf dimensions are 5 cm to 15 cm by 1,8 cm to 9 cm. The leaf tip is rounded to tapering, the base rounded to shallowly lobed or heart-shaped, the margins entire.

The cream-coloured midrib and lateral veins are prominent upon the lower surface. Four to seven lateral veins ascend on either side of the midrib towards the margins, without quite reaching them, but joining each other along variable routes. The lowest pair of veins start from the leaf base. Some net-veining is also visible but not raised. F. stuhlmannii with similar leaves has its net-veining raised.