Home » GENERA E-F » Ficus » Ficus cordata subsp. cordata growing where few trees could
Back to Category Overview
Total images in all categories: 11,756
Total number of hits on all images: 6,905,958 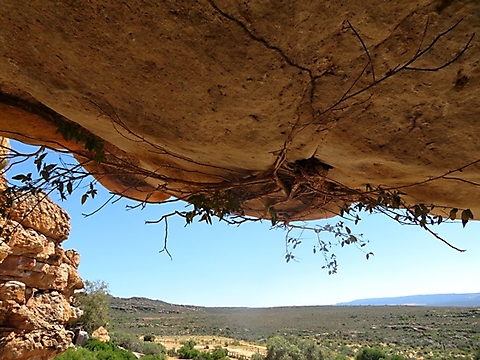 It lives under a rock, but it’s not a spider! For long, woody, leg-like branches do not a spider make. This Ficus cordata subsp. cordata is battling its way to shrub status of the most unusual kind.

Becoming a tree positioned like this is not on the cards, at least not for the next fifty years or so. The woody central bulge indicates more or less where the seed must have found its cradle crevice many years ago.

Long-dead branches show discontinuation of growing in the wrong direction. Those hugging the rock and pointing to the opposite side have confirmation of sunlight that escalated a weird ambition. Moderate success will advance to denser foliage and bigger branches, even the bearing of little figs.

Overdoing it all might later crack the rock too much, resulting in a calamitous fall and possible tree death. But the living only dwells on the limits to growth when in the guise of a human with grey hair (Mannheimer and Curtis, (Ed.), 2009; Coates Palgrave, 2002).