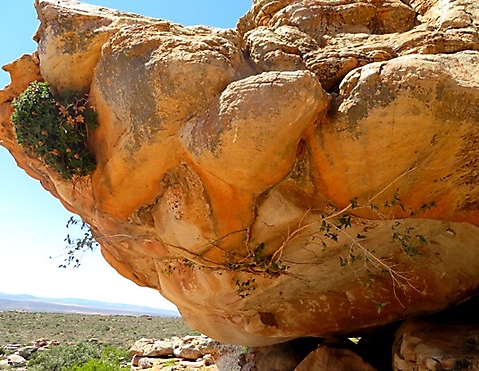 "Born" on top or on the side of a big rock is a fairly common Ficus cordata subsp. cordata or Namaqua fig starting point in its natural world. Full topsy-turvy mode, growing suspended from a crevice on the ceiling of a rock shelter is beyond the pale; the hardest option in obstacle course lifestyles thinkable for a would-be tree.

The resolve to make the best go of it is not in question as plants are plucky whatever the odds. No wavering or deviation from the natural growth strategy of its kind occurs, although the outcome reflects what that meant in growth terms, given the prevailing conditions.

Branch elongation follows the light for catching sun on the leaves soonest. And no sweat, within a few decades Bob’s your uncle, the sun will be "seen". Vertical growth is for later, once the earlier challenges have been overcome. Before the century is out, branch-tips may cast a shadow upon the host rock and the sky is the limit. Who will commiserate about a bad luck start by then?

Compact growth of a second specimen of the same Ficus sits a little higher on the same rock. Not in the same under-the-rock quandary as its mate, this one had sunlight from the start. Did not have to resort to branch elongation as its strategy. Still challenged, it lives well for now in its particular survival adaptation. Who can say whether Bonsai or Long Limbs will last longer or grow best?