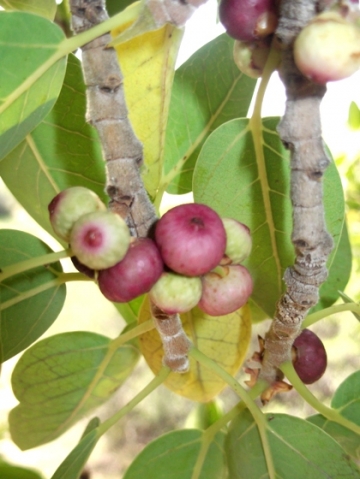 The figs of Ficus cordata subsp. cordata appear solitary, in pairs or small clusters from leaf axils. They are stalkless, sometimes with a velvety surface texture. The figs are nearly spherical in shape, somewhat flattened at the tip and base, growing to a diameter of about 1 cm. The colour of the figs varies considerably as can be observed here. Colours range from pale green or whitish, to pink, maroon, purple and even brown.

According to some records the figs should all be yellow; the red ones indicating a closely related species of F. salicifolia, the wonderboomvy (wonder tree fig), which, however, does not grow in the west of the country. These figs were photographed in October in the Gifberg.

A fig, or botanically a synconium, is the hollow inflorescence of all plants of the Ficus genus, enclosing the multiple male and female flowers facing inwards. Tiny wasps enter the opening at the fig tip to lay their eggs and use the fig as a nest, while earning their lodgings by pollinating the flowers. Every fig species may have a different, sometimes just one species contracted into this mutually vital arrangement. In the case of Ficus cordata subsp. cordata the pollinator may, however, be a butterfly that would still have to venture into the cramped surroundings among the tiny fig flowers to do its business.

There may also be parasitic wasps of other species laying their eggs through the skins of some figs, not entering through the front door. This happens to different Ficus species by wasps loath to crawl into dark holes. They clearly cannot perform pollination when laying eggs in this way. It is not known whether their larvae, once hatched, start moving about in time to be useful as pollinators while feeding on whatever is edible inside the fig.

All the South African indigenous Ficus species have edible fruit, although they are fairly to quite tasteless (Coates Palgrave, 2002; Van Wyk and Van Wyk, 1997).