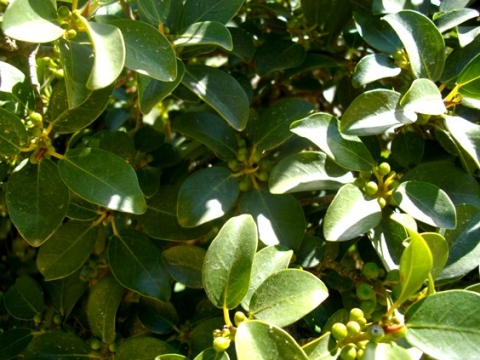 Previous
Image 8 of 60
Next

Ficus burtt-davyi is a shrub, climber or small tree, typically reaching 5 m in height (SA Tree List No. 49). The bark is smooth to slightly rough and pale grey to whitish, the young branches a little hairy.

The leaves grow on petioles of up to 2 cm with short-lived stipules next to their bases on the stem. The leaf shape is elliptic to narrowly obovate, the tip broadly tapering to rounded and the base tapering or rounded. The margins are entire. The upper surface is glossy green, thinly textured and hairless.

There are four to nine pairs of pale cream lateral veins from the notable midrib. The lowest pair of veins near the margins at the base is prominent, curving (like the others) into the next upper ones and joining close to the margins without reaching them. The variable net-veining is more notable on the lower surfaces.

The nearly spherical, stalked figs are green with whitish mottling and sparse hairs, becoming pale yellow as they ripen. They often grow in pairs and become about 6 mm in diameter. Figs may be seen on the trees all year round, but more in and near winter. Many bird species eat the figs.

The species is distributed in a broad coastal belt from the southern Cape through the Eastern Cape and KwaZulu-Natal into Swaziland and Mozambique.

The habitat is coastal and inland forests, often on dunes, in swamps and on rocky outcrops, stands of the bushes sometimes becoming dense at no more than 1 m in height. The species is not considered to be threatened in its habitat early in the twenty first century.