Ficus burkei on the wall 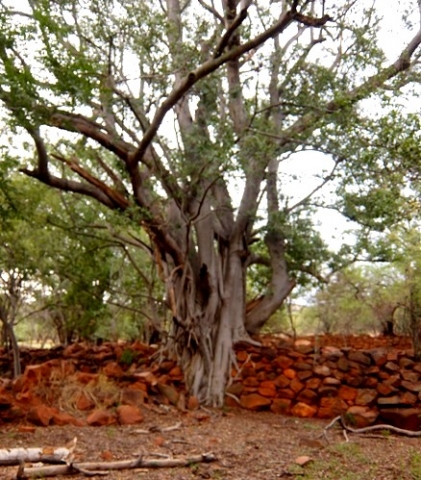 Previous
Image 7 of 60
Next

Sometimes a strangler of other trees, this Ficus burkei stem grew long ago through or next to this kraal wall built of stones in Damhoek just south of the Magaliesberg. Several of these trees have reached a size here allowing the trunk to extend beyond both sides of the wall of this more than a century old cattle kraal.

The thin aerial roots growing from stems at all heights above-ground, turn into additional, proper pale grey stems as soon as they reach the ground. Over time these additional stems merge with the main stem, extending its girth and adding to its fluted appearance. The bark is usually smooth, pale grey, brown-grey or dark grey.

The tree is widely distributed in South Africa north of the Vaal River, as well as in KwaZulu-Natal and the Eastern Cape in a broad coastal strip. It is also common in many parts of tropical Africa.

Its habitat is woodland, bushveld and semi-deciduous forest, often on rocky hillsides, in ravines and near termite mounds. The species is not considered to be threatened in its habitat early in the twenty first century (Coates Palgrave, 2002; Schmidt, et al, 2002; Van Wyk and Van Wyk, 1997; www.redlist.sanbi.org).