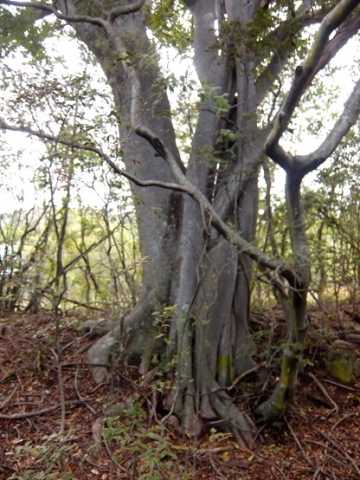 Ficus burkei, the common wild fig, is a medium-sized to large tree reaching heights up to 18 m (SA Tree List No. 48). The tree is very variable in its appearance. It is evergreen, but may sometimes be briefly deciduous. The name F. thonningii was also used in the past for the common wild fig in South Africa, but F. thonningii has become accepted as the name for a different species occurring in West Africa.

F. burkei has a dense, leafy crown, sometimes spreading wider than it is tall, but not always; and not where this tree was seen near the Magaliesberg. The leaves are alternate, spiralling or whorled, growing on green or reddish petioles, varying much in length, from 0,7 cm to 4,8 cm.

The leaf shape is elliptic, oblong or obovate with a rounded or pointed tip and a tapering or narrowly rounded base. Leaf margins are entire and sometimes wavy. Lateral veins ascend from the midrib, curving in and becoming obscure before they reach the margins; the basal pair being inconspicuous. Net-veining is clearer to see on the pale lower surface than the dark-green, faintly glossy upper one.

The fruit, small figs, are borne solitary or in pairs from leaf axils on short stalks or sessile, on no stalks. The figs are pale green to reddish, usually hairy and globose, about 1 cm in diameter.

Figs may be double this size when galls form inside them, triggered by certain wasps. Several species of wasps (at least 28 of them) are known to use these figs (and pollinate the internal florets while reproducing).