Home » GENERA E-F » Ficus » Ficus abutilifolia fruit
Back to Category Overview
Total images in all categories: 11,779
Total number of hits on all images: 6,931,745 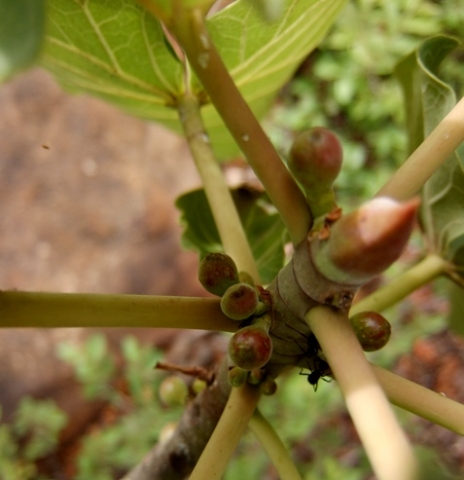 Previous
Image 3 of 60
Next

The fruit of Ficus abutilifolia, a small, spherical to pear-shaped fig of about 2 cm in diameter (figlet?), grows singly or in groups of up to five from leaf axils (or lower down where leaves have already dropped off). The figs may have stalks of up to 1 cm or none at all.

In picture they are green with red patches; sometimes hairy. The red colour indicates ripening, although these are still small; ripe fruit may be dark red, while some white mottling upon the surfaces is also present. The figs appear from late winter through summer or a little later.

These figs are edible, much more appetising than the only technically edible ones of many South African wild fig species. The fruits are widely relished by birds and animals like monkeys and baboons. This photo was taken in January in the Pretoria National Botanical Garden.

Near the (blurred) stem tip where the leaves and fruits emerge, the stem is thick with distinct constricting rings between which the surface bulges.

A solitary ant is probably looking for food. What it will find is unclear, figs being pollinated by wasps entering the slightly raised apical pore of the fruit. But there is no fig-hole big enough to admit a wasp that can deny entry to the industrious ant (Coates Palgrave, 2002; Schmidt, et al, 2002; Pooley, 1993).