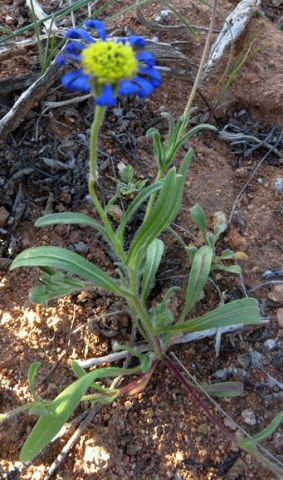 There are about 85 species of Felicia on earth, all in Sub-Saharan Africa and Arabia. Southern Africa is home to 78 of them, the fynbos region has 50, Namaqualand 22 and the Little Karoo 17.

Identifying the one you meet in the south and west of South Africa may involve most complexity. Have fun with the following decision-making options, remembering that some other Asteraceae plants resemble Felicia:

The plants are annuals, perennials or shrublets.

There leaves may be basal in a rosette or tufted, otherwise up the stems, alternate or opposite. The leaves are usually hairy, narrow or broad, rarely with toothed margins.

The flowerheads grow solitary on peduncles above the leaves. Most flowerheads have yellow discs (blue in few instances), while rays are usually present, often blue, sometimes mauve or white.

There are two to four rows of bracts forming the involucres, mostly narrow and membranous.

The receptacle has no scales.

The flattened, hairy fruits have thick margins and a pappus of barbed bristles (some ray florets have no pappi).

The plant in picture seen in Namaqualand in August may be Felicia merxmuelleri, could also be F. dubia or, when desperation rules: F. I-don’t-know or even Asteraceae something-else (Leistner, (Ed.), 2000; Vlok and Schutte-Vlok, 2010; Manning, 2007; iNaturalist; http://redlist.sanbi.org).