Home » GENERA D-F » Felicia » Felicia echinata
Back to Category Overview
Total images in all categories: 9,395
Total number of hits on all images: 4,220,040 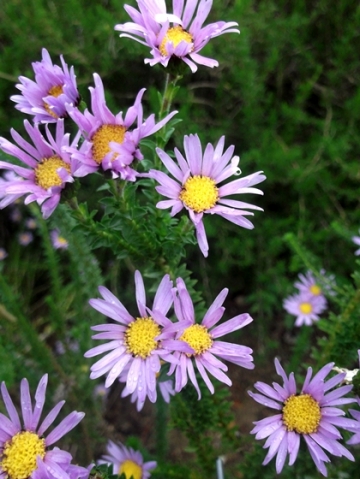 Previous
Image 7 of 28
Next

Felicia echinata, commonly known as the dune daisy or prickly felicia and in Afrikaans as bloublommetjie (little blue flower), is an evergreen shrublet reaching heights around 60 cm.

Flowering occurs in small groups of flowerheads at stem tips. Each head is comprised of blue or mauve-blue ray florets in a single whorl around a central disc of tiny yellow florets above an involucre consisting of a couple of rows of green bracts. White-flowered plants are sometimes seen; even pink ones occur. The flowerhead or capitulum measures about 2 cm across. Flowering happens in spring to midsummer.

The species distribution of this South African endemic is coastal from Mossel Bay in the Western Cape to Port Alfred in the Eastern Cape. The habitat is coastal bush on stable dunes or flats in sandy soil. The species is not considered to be threatened in its habitat early in the twenty first century (Moriarty, 1997; Gledhill, 1981; www.plantzafrica.com; www.redlist.sanbi.org).