Home » GENERA D-F » Euryops » Euryops tysonii
Back to Category Overview
Total images in all categories: 9,597
Total number of hits on all images: 4,316,254 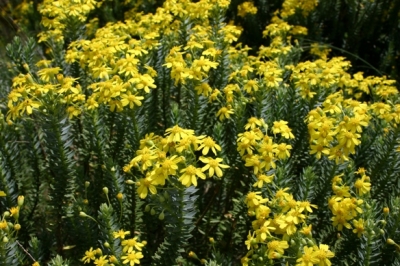 Euryops tysonii, commonly known as the Mt Currie true-eye, is a densely leafy shrub with erect stems and yellow daisy flowerheads in axillary clusters at the stem tips. The fruit is hairless and ribbed.

The species distribution is in Lesotho and the South African provinces around it, viz. KwaZulu-Natal, Eastern Cape and Free State, always fairly close to the Lesotho border. The photo was taken in the Sani Pass.

The habitat is rocky slopes and boulder beds of the southern Drakensberg and the Maluti Mountains of Lesotho. The species is not considered to be threatened in its habitat early in the twenty first century (Manning, 2009; http://redlist.sanbi.org).