Home » GENERA D-F » Euryops » Euryops pectinatus, smaller but older
Back to Category Overview
Total images in all categories: 8,952
Total number of hits on all images: 3,967,884 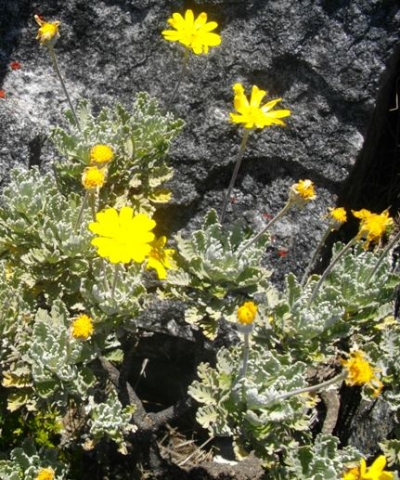 This Euryops pectinatus plant, exposed on rock at the top of Table Mountain, looks different to some of the other specimens shown here, living in the lap of luxury. Still, this plant has produced a good offering of yellow flowerheads subtended by cup-shaped involucres upon tall, sturdy peduncles. Under these conditions stems are understandably a little shorter, having added less growth per annum while acquiring more woodiness.

The parallel, elongated leaf lobes ascend slightly, some of them curving inwards a little, maybe due to a lack of moisture at the end of November. New leaves in the centres of the stem tip rosettes are paler grey, whitish; some of the outer, older leaves spreading widely are discoloured to beige, signifying their imminent departure.

Blackish grey stems, curved, branched and woody, are visible below. They are similarly coloured to the sandstone rock surface they shade, bare where the leaves of many years no longer grow (Manning, 2007).