Home » GENERA D-F » Euryops » Euryops oligoglossus
Back to Category Overview
Total images in all categories: 9,393
Total number of hits on all images: 4,218,848 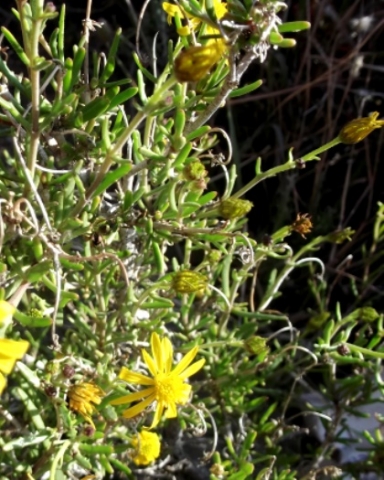 The leaves are smooth, blue-grey and somewhat succulent. They are linear to slightly triangular and keeled. They become from 5 mm to 15 mm long and up to 2 mm wide.

The flowerheads have one row of yellow ray florets around a yellow central disc, becoming about 15 mm in diameter. The flowerheads grow on stalks of up to 3 cm near stem tips. Flowering happens in winter and spring.

The species distribution is from Worcester in the Western Cape to the Eastern Cape and Lesotho. The plants grow in loam or clay soils in various lowland habitats, but not in fynbos. It is moderately palatable, occasionally browsed. There are two recognised subspecies, viz. subsp. oligoglossus and subsp. racemosus, neither of which is threatened in its habitat early in the twenty first century (Vlok and Schutte-Vlok, 2010; JSTOR; www.redlist.sanbi.org).