Home » GENERA D-F » Euryops » Euryops chrysanthemoides
Back to Category Overview
Total images in all categories: 8,965
Total number of hits on all images: 3,976,024 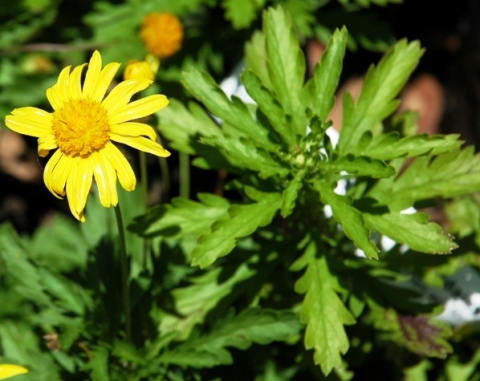 Previous
Image 1 of 31
Next

Euryops chrysanthemoides is also known as resin bush and golden daisy bush, although the latter name is probably shared with several species. This evergreen shrub has long narrow leaves with deep indentations between the oblong lobes with their rounded tips.

The bright yellow daisy flowerhead shape is the hallmark of the Asteraceae family. Resin bush flowers have varying numbers of ray florets and tiny yellow to slightly orange disc flowers in the centre. Flowering is more vigorous in the colder months, but may continue throughout the year. The seeds are black, ridged and spindle-shaped. The plant is indigenous in the eastern parts of South Africa from the Eastern Cape to Mpumalanga. It is hardy and tends to seed itself freely once introduced in the garden (www.plantzafrica.com).