Home » GENERA D-F » Drosera » Drosera aliciae flower
Back to Category Overview
Total images in all categories: 9,387
Total number of hits on all images: 4,216,925 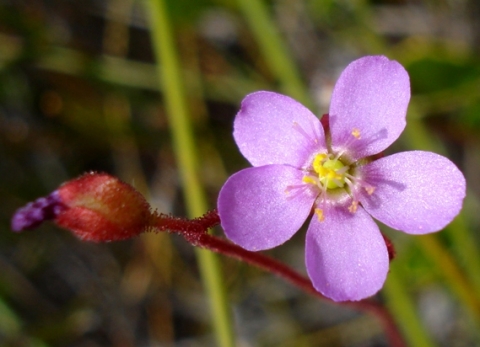 Drosera aliciae, the ground rose or Cape sundew, grows several pink to magenta flowers on an erect, slender scape that emerges from the side of the leaf rosette. The raceme is one-sided, curving outwards and tending to droop. The scape reaches from 15 cm to 40 cm in height; the one in picture shows brick red colouring and a covering of similarly coloured hairs.

Flowers spread their five petals up to 2 cm in diameter. The stamens spread around the pale green ovary, visible in the flower centre. The stigma divides into two or three branches in this species.