Home » GENERA B » Bulbine » Bulbine succulenta
Back to Category Overview
Total images in all categories: 11,632
Total number of hits on all images: 6,749,741 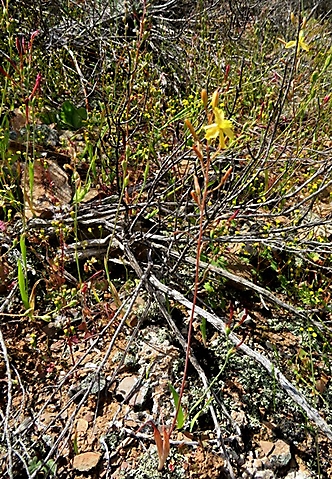 Bulbine succulenta, commonly known as the compass plant and in Afrikaans as dikkopieva (thick kopiva), is a small leaf-succulent growing from a lobed, underground tuber that ends in a fibrous collar near ground level.

The plant reaches heights to around 20 cm when flowering. It dies back in summer heat after blooming, recovering in cooler temperatures and autumn rains.

The species distribution is inland in the Western Cape from the western part of the Little Karoo to the Tankwa Karoo, the Bokkeveld Plateau and western Karoo including Matjiesfontein. It also grows in the southwest of the Northern Cape as far as Calvinia. The photo was taken near Barrydale.

The habitat is diverse, including fynbos, succulent Karoo and shale renosterveld. The plants thrive in semi-arid, winter rainfall conditions, growing in clayey soils on gravelly flats and lower slopes. The species is not considered to be threatened in its habitat early in the twenty first century (Smith, et al, 2017; Vlok and Schutte-Vlok, 2015; Manning and Goldblatt, 1997; iNaturalist; http://redlist.sanbi.org).