Home » GENERA B » Bulbine » Bulbine succulenta flower
Back to Category Overview
Total images in all categories: 11,632
Total number of hits on all images: 6,749,715 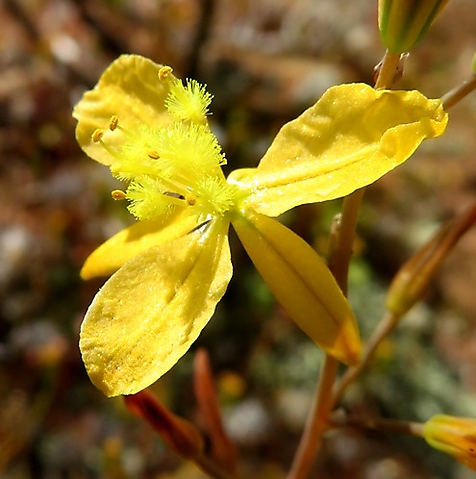 The bright yellow Bulbine succulenta flower has six spreading tepals, the outer three notably narrower and straighter in picture than the inner three that are obovate with wavy margins. There are green or yellow, central vein lines on both surfaces of each tepal.

The six stamens have conspicuously bearded sections midway upon their filaments. These fluffy beards are lemon yellow here, lighter coloured than the short, chunky anthers that are granular with pollen.

Flowering happens from before midwinter into part of spring. The photo was taken in October (Smith, et al, 2017; Vlok and Schutte-Vlok, 2015; Manning and Goldblatt, 1997; iNaturalist).