Home » GENERA B » Bulbine » Bulbine praemorsa
Back to Category Overview
Total images in all categories: 11,104
Total number of hits on all images: 5,771,780 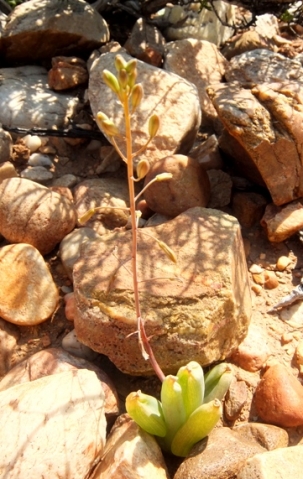 Bulbine praemorsa, in Afrikaans commonly known as slymuintjie (slime nutsedge from the Dutch, small onion), is a perennial growing from a small tuber. Many Bulbine species are not geophytes, i.e. have no tubers. South Africa is home to 46 of the about 50 Bulbine species.

B. praemorsa reaches heights between 20 cm and 60 cm. The species distribution is widespread in the west of South Africa from the Cape Peninsula to Namibia. Its habitat is rocky sandstone slopes, often in red sandy loam soil. This plant was photographed near Oudtshoorn in the Little Karoo (Manning, 2009; Le Roux, et al, 2005; iSpot; www.pacificbulbsociety.org).