Home » GENERA B » Bulbine » Bulbine latifolia
Back to Category Overview
Total images in all categories: 11,901
Total number of hits on all images: 7,143,079 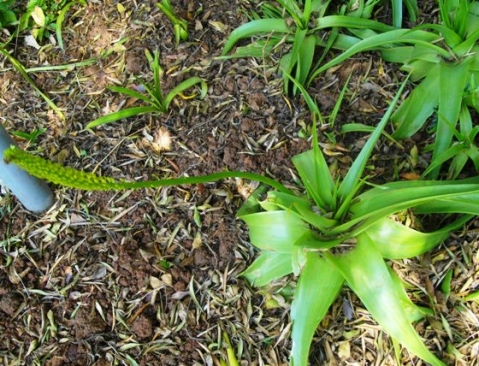 Bulbine latifolia, previously B. natalensis, the broad-leaved bulbine, is a perennial evergreen succulent herb that was recently embroiled in controversy about its medicinal qualities. Van Jaarsveld, et al, 2000 refer to it as the hairy bulbine and the kopiva aloe, to mention another of the common names of the plant.

Special interest was generated by the (disputed) claim that the plant provided a booster of testosterone and male sexual capacity. The literature presents many other medicinal uses for this plant that do not appear to be in question.

The leaves of B. natalensis are broad, green, semi-translucent and fleshy or succulent, tapering to sharp points. The rosette of succulent leaves gives rise to the Aloe reference in the plant’s common names.

The long flowering stalk has many star-shaped yellow flowers that succeed each other in small batches from the bottom up, opening for about a day each. Like all Bulbine genus flowers they have hairy filaments, in contrast to those of the related genus, Bulbinella, that lacks this feature.

B. latifolia grows in the Eastern Province in places like the Baviaanskloof and hot dry parts of KwaZulu-Natal and Mpumalanga. This plant was seen in the Botanical Garden at the Potchefstroom Campus of the North-West University where it was found well tended. The plant is drought resistant, frost tender and performs well in semi-shade as well as in full sun (www.anniesannuals.com).