Home » GENERA B » Bulbine » Bulbine narcissifolia leaves
Back to Category Overview
Total images in all categories: 11,549
Total number of hits on all images: 6,634,840 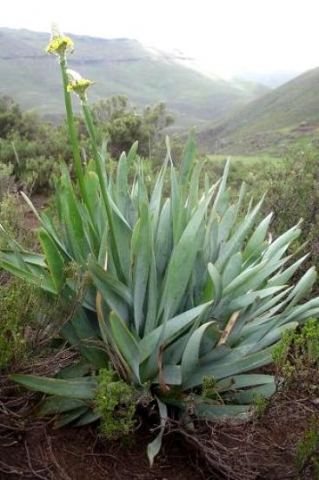 The grey-green, strap-like and semi-succulent leaves of Bulbine narcissifolia are displayed clearly in this mature clump. Some of the leaves are twisted, another feature of the species. Preserved in the specific name, the leaf similarity to those of plants belonging to the Narcissus genus, (daffodil, jonquil and narcissus), indigenous in Europe (and wider), may well be recognised. The plant is stemless, the leaves growing directly from the underground rhizome.

The distribution of this perennial ranges from the Easter Cape to North West and Limpopo, but the plant does not grow in the western and north-eastern regions of the country. It is also found in Botswana.

A fleshy rhizome, leaf succulence and successful adaptation to widely divergent conditions are all contributing factors to the plant’s current stable population. So there is little survival threat early in the 21st century, although the plant is still used medicinally by local populations (Manning, 2009; www.plantzafrica.com).