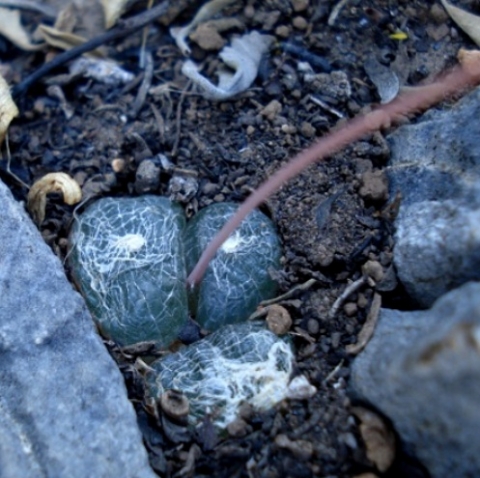 Bulbine mesembryanthemoides subsp. mesembryanthemoides is a very small plant with a long name. It is a leaf succulent that produces one to a few leaves from an underground tuber. The leaves are globular to rectangular succulent structures as seen from above. They are cylindrical seen from the side, growing from the top of the tuber. Little of the cylinder can be seen above ground as the leaves do not protrude much above ground level.

The leaves have translucent, glass-like tops with jelly-like contents, stored for just the opposite extreme of rainy days. Leaf translucence has earned this and several other succulents with similar appearance the local Afrikaans name of waterglasie (little water glass). When drought sets in, the leaf succulence diminishes and the leaves shrivel as the plant survives by using its larder.

This allows the plant to use another hard-times strategy by disappearing into the underground, avoiding the sun. Being out of the sun reduces water loss considerably during the remainder of the dry season. Translucence in the growing season allows sunlight into the leaf, achieving photosynthesis in cells inside the skin, way below the leaf top.

The rounded leaf shape also contributes to water retention by having less surface from which evaporation can occur, per volume of leaf content. A spherical leaf has 40 times more content for the same surface area than a two-dimensional or flat leaf.

The flower stalk can be seen here, emanating between two leaves. This plant was photographed in September near Oudtshoorn, when the leaves were replete with moisture and the plant was flowering (Noltee, Veld & Flora, March 2013; Vlok and Schutte-Vlok, 2010).