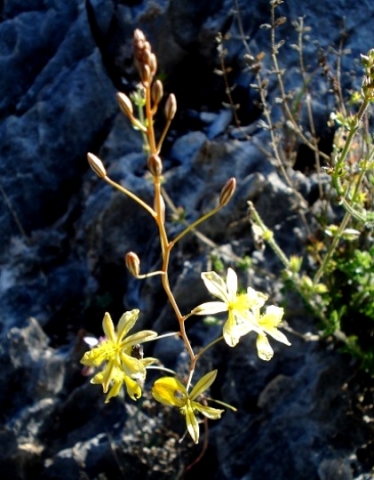 These yellow flowers of Bulbine mesembryanthemoides subsp. mesembryanthemoides look familiar to those acquainted with Bulbine plants. The leaves, however, shown in a second photo of the plant in this Album, appear quite different to many of the common Bulbine species. In dry seasons the leaves may already have disappeared below ground by the time the flowers appear.

The lax raceme of six-tepalled, star-shape flowers displays the feathery stamens that distinguish the genus from Bulbinella flowers. When in flower the plant stands 12 cm to 20 cm tall. The stamen shape is a marketing ruse of the flowers to attract pollen-consuming insects that expect to find large quantities of pollen to feed on.

The leaves are edible, sometimes eaten by children without money for jelly tots. This habit is fortunately under control for reasons such as: few children wander in the veld for such purposes in modern times; the leaves are small, not easy to spot; the leaves are below ground in the dry season; and the distribution area is large, ranging from the Richtersveld in the Northern Cape throughout the Western Cape to the Eastern Cape inland. The population of this plant is stable in habitat early in the twenty first century, giving no cause for concern.

A second subspecies, viz. B. mesembryanthemoides subsp. namaquensis is found in the southern Richtersveld (Vlok and Schutte-Vlok, 2010; www.redlist.sanbi.org).