Home » GENERA B » Bulbine » Bulbine latifolia pale leaves
Back to Category Overview
Total images in all categories: 11,036
Total number of hits on all images: 5,685,798 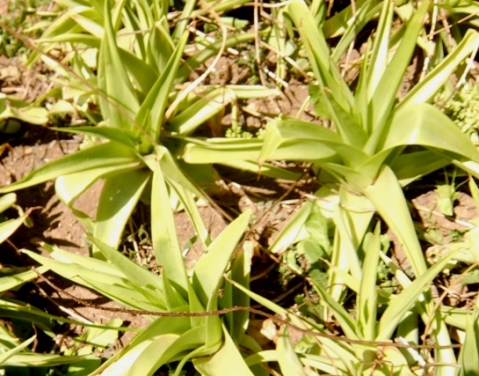 These lush leaf rosettes of Bulbine latifolia were seen in January in the Walter Sisulu National Botanical Garden. Planted together here, they would in nature also form large colonies.

The older leaves spread, younger ones ascend, the newest in the centre the most; all of them channelled with straight, entire margins to their acutely pointed tips. Leaf colour is pale yellowish green here. It may also be bright or deep green, the leaf texture soft and smooth, hairless.

There used to be a distinction between B. latifolia of the Eastern Cape, a smaller form with narrower, deep green leaves and B. natalensis that is no longer recognised as a separate species.

The plant is used for a wide range of ailments, also as charm as a garden plant. In spite of this wide usage, the species is not considered to be threatened in its habitat early in the twenty first century (Pooley, 1998; www.redlist.sanbi.org).