Home » GENERA B » Bulbine » Bulbine frutescens, the useful balsam kopiva
Back to Category Overview
Total images in all categories: 11,756
Total number of hits on all images: 6,905,765 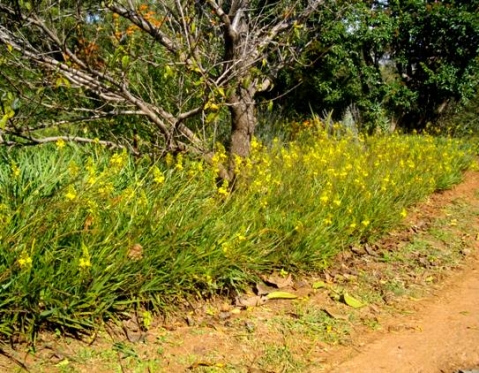 Many South Africans plant Bulbine frutescens. It grows easily and robustly, flowers well for long periods and branches much to cover unsightly bare patches of even poor soil. This is a tough little warrior, undaunted by hot sun, winter cold or little water. Any plant that doesn’t display accusatory suffering when neglected is welcome like family that supply their own food!

Few people know that this plant has proven medicinal value for treating skin conditions such as burns and insect bites. Its common names, burn jelly plant (just break a leaf and apply the juice to the afflicted area) and in Afrikaans, balsam kopiva (copaiba balsam) reflect this.

This Afrikaans name brings a curious perspective, interesting to trace further. The copaiba tree (Copaifera officinalis) name was long ago hijacked (still a common local pastime), apparently only because the two plants share superior though only tenuously related medicinal value. Copaiba is a leguminous tree of South America. It yields an essential oil with anti-inflammatory properties through distillation of its gum or resin. There seems to be nothing other than the impressive healing properties that constitute the link between the two plants endemic to two different continents. The naming of entities often relates to limited formal knowledge, but life skills and resourcefulness of the local populace.

In Afrikaans there are names like seekoei (sea cow for hippopotamus), ribbok (reebok) and steenbok (steinbock); all names that became ascribed to new animals found in South Africa by early Dutch settlers who remembered the names of different animals from their earlier European world. It is possible that those conferring these names to African species had never seen the animals originally bearing the names.

Maybe the inability to think of an appropriate new name leads to the borrowing of a known one. Tsar Peter the Great kept naming subsequent sons Peter or Paul when earlier ones with those names had died. This would be because he liked the names or their connotations, not because of a dearth of available names. Fathoming the motivation behind names given in the past thus also requires dealing with the knowledge available at the time (Wikipedia; www.plants.usda.gov; www.aromaticsinternational.com; www.plantzafrica.com).