Home » GENERA B » Bulbine » Bulbine cepacea
Back to Category Overview
Total images in all categories: 11,523
Total number of hits on all images: 6,599,546 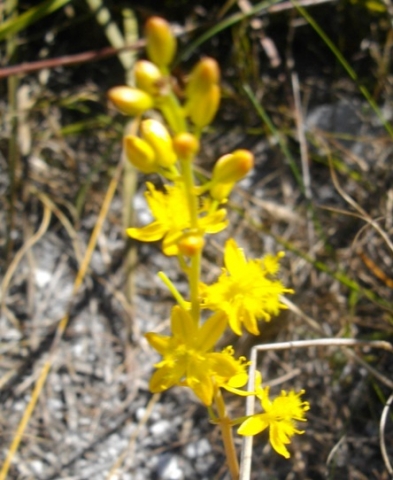 Previous
Image 8 of 38
Next

Bulbine cepacea, in Afrikaans the herfskwassie (little autumn brush), is a clump-forming perennial that grows flower stems to heights between 20 cm and 40 cm. Its tuber-like rhizome is large and flat at the bottom upon thick roots. The tuft of fleshy leaves is narrow and flattened, mostly already dried out at flowering time, which happens in autumn. A fibrous sheath surrounds the leaves at the base.

The star-like, yellow flowers of the herfskwassie grow in a cylindrical, usually dense raceme. The scented flowers with their spreading tepals last about one day each. For many days continually a few flowers will be open, starting from the bottom of the raceme until it is flowered out to the top. It is the fluffy yellow growths found lower down on the filaments of each flower that have been likened to a brush in the common name. The fruits are ellipsoid, carried upright.

The plant grows on stony, sandy flats and lower slopes in the southwestern parts of the Western Cape from Clanwilliam to Riversdale. The species is not considered to be threatened in its habitat early in the twenty first century (Manning, 2007; Manning and Goldblatt, 1996; iSpot; www.redlist.sanbi.org).