Home » GENERA B » Bulbine » Bulbine capitata flowers
Back to Category Overview
Total images in all categories: 11,662
Total number of hits on all images: 6,774,684 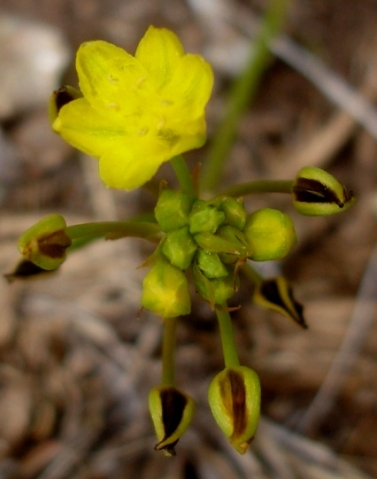 Previous
Image 6 of 38
Next

The tiny flowers of Bulbine capitata grow in head-like racemes at the tips of erect, green or greenish-yellow stalks. Young racemes are conical, elongating to a more cylindrical shape as they develop. The sweet-scented flowers are bright yellow, about 1 cm in diameter. The yellow tepals are elliptic, the inner whorl of three are broader than those in the outer whorl. The upper part of each filament is bearded with long hairs. The stigma is cylindrical, 3 mm long. Triangular bracts subtend the flower pedicels, becoming papery, but remaining persistent.

Buds, flowers and fruits are often seen together on the same raceme, as is the case in this picture. The flowering happens from late winter through spring, often after veld fires. The photo was taken in January, later than the stated blooming season (Manning, 2009; iSpot; JSTOR).