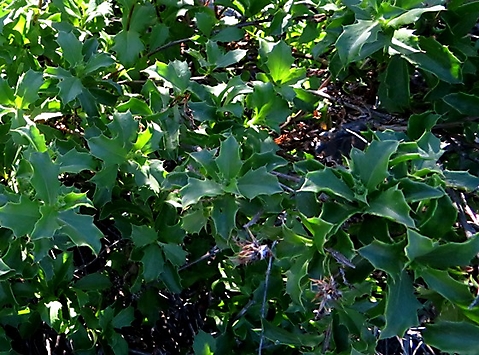 Berkheya, commonly known as wild thistle, is a genus of perennials and subshrubs in the Asteraceae family. The spiny plants are sometimes also cobwebby or woolly.

The leaves are alternate or grow directly from the base; rarely opposite while the leaf bases extend down the stem below the insertion (decurrent) in some species. The leaf margins are toothed to lobed with spine-tips, in some nearly entire or pinnately divided, sometimes deeply or to the midrib.

The flowerheads grow solitary from stem-tips, to many-flowered on short branchlets, rarely in corymbs or umbels. The involucral bracts grow in a varying number of rows around the bell-shaped heads in the different species. The bracts are joined at the base, spiny at their tips and often along the margins as well. The receptacle is flat, its surface honeycombed with fringed pit margins.

Some heads have ray florets in a single row around their many-flowered discs. The mostly yellow, rarely white or mauve rays are strap-shaped and sterile. The disc is densely populated with tubular, five-lobed disc florets, bisexual or sometimes only male in the middle of the disc.

The anthers are linear, arrow-shaped at their bases with oblong appendages at their tips. The style is cylindrical, sometimes branched. The obovoid, ribbed fruit is small and dry, consisting of one seed that is sometimes hairy. It is attached to a pappus of barbed bristles or long scales.

There are about 75 Berkheya species, all in Africa and 71 of them occurring widespread in southern Africa. Some species are used medicinally. Plant palatability varies from much browsed to not at all. Some species are pioneers on disturbed ground.

Berkheya plants resemble certain Cullumia species that do not have scales or bristles on their pappuses. The plant in picture is Berkheya spinosa (Leistner, (Ed.), 2000; Vlok and Schutte-Vlok, 2015; Manning, 2009).