Home » GENERA B » Berkheya » Berkheya rigida
Back to Category Overview
Total images in all categories: 11,894
Total number of hits on all images: 7,136,436 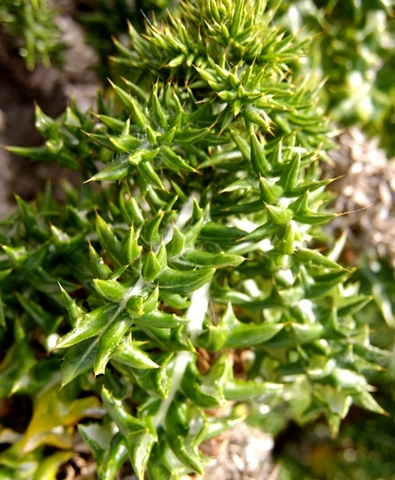 Berkheya rigida, commonly the wild thistle and in Afrikaans disseldoring (thistle thorn), is a prickly perennial that grows to 1 m in height.

The alternate leaves are deeply dissected into prickly-tipped, narrow lobes with margins rolled under. The midribs are big and white, sometimes conspicuous. The blade colour ranges from green to pale grey.

The species distribution is in the Western Cape from Langebaan to Riversdale. The photo was taken near the beach in the Cape Columbine Nature Reserve during May when no flowering should be expected. Bloomtime is spring until after midsummer.

The habitat is clay and granite slopes and flats. The species is not considered to be threatened in its habitat early in the twenty first century (Curtis-Scott, et al, 2020; Manning, 2007; Bond and Goldblatt, 1984; iNaturalist; http://redlist.sanbi.org).