Home » GENERA B » Berkheya » Berkheya purpurea
Back to Category Overview
Total images in all categories: 11,632
Total number of hits on all images: 6,749,086 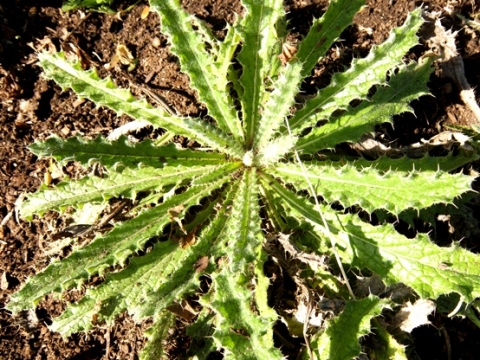 Berkheya purpurea, the purple stream thistle or in Afrikaans the bloudisseldoring (blue thistle thorn), is a tufted perennial with a winged stem that reaches 80 cm in height. The basal leaf rosette in the photo without a stem yet, has larger leaves than will grow up the stem to follow.

The plant produces several large flowerheads concurrently at bloom-time, the ray florets in various shades of mauve to almost white, the disc dark in colour. Flowerheads reach a diameter of up to 8 cm. The flowers may be stalked or not, the involucral bracts leaf-like. Flowering occurs from midsummer to midautumn.

The distribution of this Berkheya is inland in the Eastern Cape, the eastern Free State and the southwestern mountains of KwaZulu-Natal, as well as in Lesotho.

It grows on grassy slopes and among scrub on streambanks. The species is not considered to be threatened in its habitat early in the twenty first century (Manning, 2009; Pooley, 1998; www.plantzafrica.com; http://redlist.sanbi.org).