Home » GENERA B » Berkheya » Berkheya onobromoides
Back to Category Overview
Total images in all categories: 12,086
Total number of hits on all images: 7,380,987 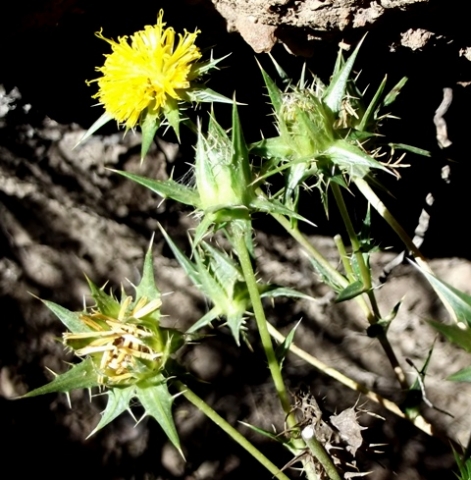 Berkheya onobromoides is one of many thistle-like shrubs of the Berkheya genus. There are also many perennial herbs in this genus. South Africa has 71 species of Berkheya; the remaining four grow in tropical Africa.

This plant shares its common Afrikaans name of disseldoring (thistle thorn) with other Berkheya species. It has a second Afrikaans name though, being all by itself known as the ruikdissel (smell thistle). This suggests some fragrance, although it is not known whether the scent is best associated with the yellow colour of the disc flowers or the sharpness of the surrounding spines.

B. onobromoides reaches 1,5 m in height. The stems are covered in glandular hairs.

The plant is found in Namaqualand, the western Karoo and as far east as Uniondale in the Little Karoo, as well as to the south of the Langeberg. The habitat is sandy soil on flat ground, often on disturbed sites (Bond and Goldblatt, 1984; iSpot; Vlok and Schutte-Vlok, 2010).