Home » GENERA B » Berkheya » Berkheya herbacea
Back to Category Overview
Total images in all categories: 12,086
Total number of hits on all images: 7,380,929 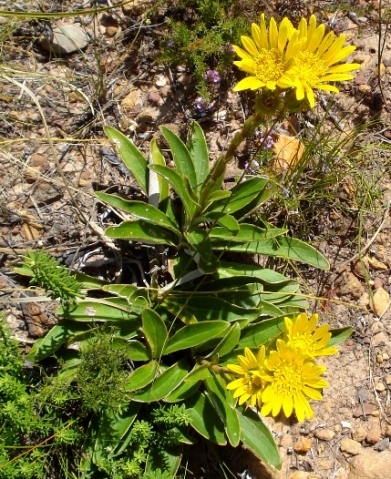 Berkheya herbacea, in Afrikaans the kaaldisseldoring (bare thistle thorn), is a tufted perennial that reaches 40 cm in height when in flower. The plant has a woody rootstock from which a basal leaf rosette grows and branched flower stalks resprout annually.

The leaves in picture seem to be without spines; they may sometimes be variably fringed with prickles along their margins, also (or more so) upon the smaller, alternate, clasping and reducing leaves up the peduncles. Leaves are hairless above, white felted below.

The species is a Western Cape endemic, confined to a distribution in the far southwest from Hottentots Holland and Worcester to Bredasdorp. The habitat is lower to middle sandstone slopes among fynbos. The species is not considered threatened in habitat early in the twenty first century (Manning, 2007; iSpot; www.redlist.sanbi.org).