Home » GENERA B » Berkheya » Berkheya fruticosa
Back to Category Overview
Total images in all categories: 11,523
Total number of hits on all images: 6,599,447 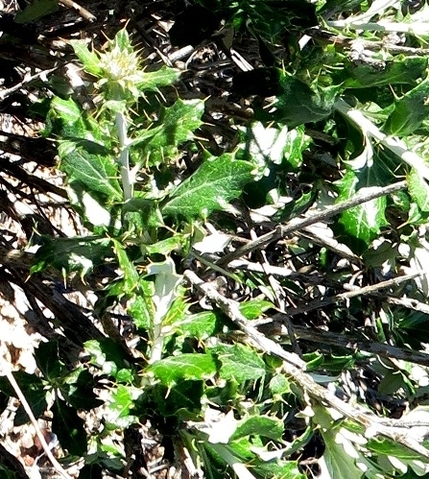 The alternate leaves are ovate to elliptic, dark green and shiny above, white woolly below. Upper surface hairs are less, mainly found along the midrib and few pairs of ascending lateral veins. The scalloped leaf margins rolled under have sparsely spaced spines of about 4 mm long. Leaves become about 4 cm long and 2,5 cm wide.

The species distribution is along the west coast from the north of the Western Cape through Namaqualand and the Richtersveld in the Northern Cape to southern Namibia. The photo was taken at Naries, west of Springbok.

The plants grow on dry sandy flats, coastal dunes, rocky slopes and outcrops. They are palatable to game and stock. The species is not considered to be threatened in its habitat early in the twenty first century (Williamson, 2010; Le Roux, et al, 2005; Manning, 2009; iNaturalist; http://redlist.sanbi.org).