Home » GENERA B » Berkheya » Berkheya cuneata young leaf colour
Back to Category Overview
Total images in all categories: 11,538
Total number of hits on all images: 6,618,437 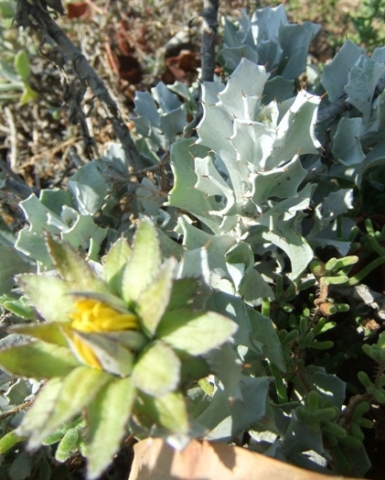 Names do not always do justice to that which they represent. Like the mundane names of vaaldissel (grey thistle) or vaalbietou (grey bietou) for a plant approaching its prime.

The young Berkheya cuneata leaves at the stem-tip in picture appear sculpted in marble; erect and bluish white or the palest of green where the sun doesn’t touch. They still present a velvety or felted appearance, contrasting against the sharp spines spaced along the tips of the angular margin lobes.

There is more green colouring in the bracts around the yellow bud ready to open than in the leaves. This species grows on rocky slopes in the Little Karoo (Manning, 2009; Vlok and Schutte-Vlok, 2010).