Home » GENERA B » Berkheya » Berkheya cruciata
Back to Category Overview
Total images in all categories: 11,921
Total number of hits on all images: 7,168,350 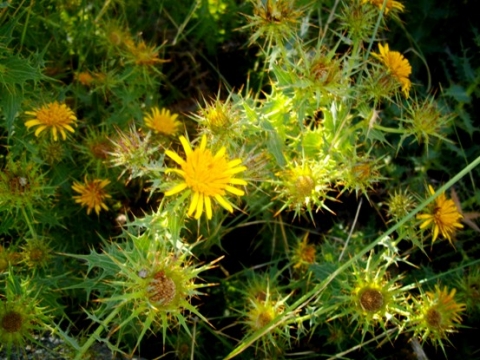 Berkheya cruciata is a somewhat herbaceous shrub, hard to classify in the border area between herbs and shrubs. The more categories are used in a classification system, the more the grey areas where judgment may become tricky when the underlying data is continuous.

This plant grows from a single basal stem, branching erect secondary stems to 1,5 m. The species does not resprout after fires. It is endemic to the Little Karoo and the western parts of the Langkloof, growing abundantly in sandy soil among both arid and moist fynbos, also on higher slopes of the Swartberge.

This plant was photographed in Meiringspoort (the Swartberge) during January (Vlok and Schutte-Vlok, 2010; iSpot; Bond and Goldblatt, 1984).