Home » GENERA B » Berkheya » Berkheya coriacea flowerheads
Back to Category Overview
Total images in all categories: 11,912
Total number of hits on all images: 7,163,131 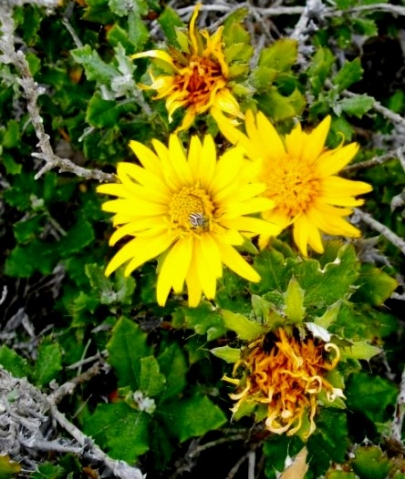 Previous
Image 9 of 40
Next

The yellow flowerheads of Berkheya coriacea grow solitary at stem-tips in late winter and early spring. Ray florets in one partly overlapping row around the disc are narrowly elliptic with notched tips. In one of the flowers in picture most disc florets are still budding, densely clustered in the centre; only a few open florets show their five spreading lobes. A second flower is older; the disc florets open in the centre and already fading near the perimeter of the disc.

Other flowerheads are past blooming, not looking their best. Inside them the seeds are developing below a withered upper layer, almost ready to be discarded. The pale upper row of involucral bracts is visible around the corollas of these withered flowerheads, while still hidden behind the ray florets of the blooming ones. The bracts have spine-toothed margins resembling the leaves, but for colour, width and their margins not as rolled under (Bond and Goldblatt, 1984; iSpot).