Home » GENERA B » Berkheya » Berkheya barbata in Fernkloof
Back to Category Overview
Total images in all categories: 11,506
Total number of hits on all images: 6,493,857 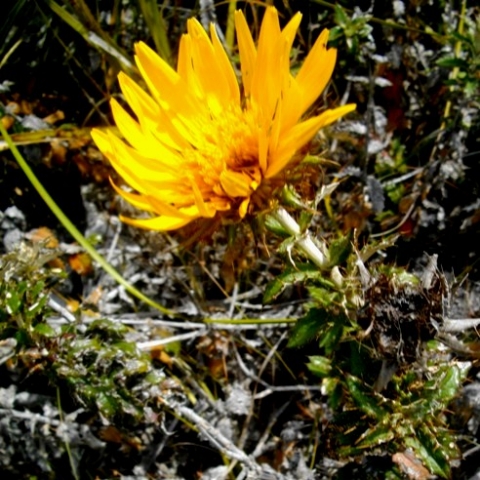 Previous
Image 6 of 39
Next

Several rows of prickly bracts occur below the large orange-yellow ray florets of this Berkheya barbata flowerhead. Several Berkheya species are commonly known as wild thistles. This species lives well near the coast, in spite of salty sprays and strong winds. It also has no problem with summer drought of inland karoid veld in part of its habitat. Security is enhanced by its ample covering of sharp spines. The species is not considered threatened in nature early in the twenty first century.

This plant used to be called B. grandiflora, B. ilicifolia and Gorteria barbata at various stages of its history in botanical studies (Manning, 2007; www.redlist.sanbi.org).