Home » GENERA B » Berkheya » Berkheya barbata flowerhead
Back to Category Overview
Total images in all categories: 12,061
Total number of hits on all images: 7,359,865 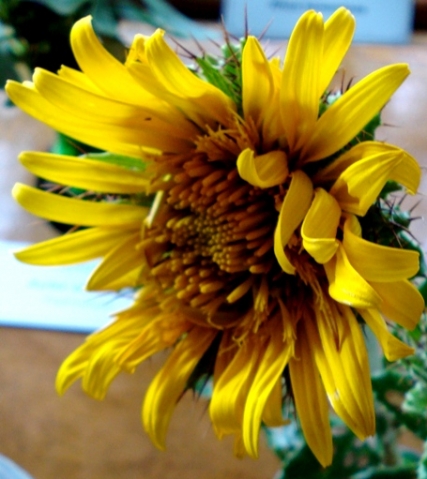 Previous
Image 4 of 40
Next

The somewhat unkempt appearance of this Berkheya barbata flowerhead, ray florets in a higgledy-piggledy double row, is added to by the long-spined bracts showing their green tips just behind. The bracts are slightly shorter than the rays, but look very capable of defending both corolla and the fertile treasure it encircles. The yet to open central florets of the disc are fairly neatly arranged apart from some scattered gaps.

Some already open florets, five-lobed and taller than the buds, surround the centre of the disc. While only disc florets are fertile in Berkheya, the ones right in the centre are in some species only male (Manning, 2007).