Home » GENERA B » Berkheya » Berkheya barbata floral remains
Back to Category Overview
Total images in all categories: 11,912
Total number of hits on all images: 7,163,118 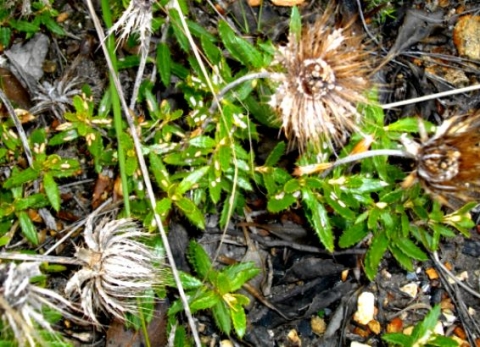 Previous
Image 3 of 40
Next

When the carnival was over, the yellow ray florets wilted and dropped, the disc florets developed into fruits and their seeds dispersed. Only the harder parts of the flowerheads still persist.

Seen from the top, the vacant gap where the Berkheya barbata florets and fruits had stood upon the receptacle is surrounded by the spine-tipped bracts, narrower than the leaves. From the side, the many dense rows of spreading-ascending involucral bracts of the flowerhead resemble armour from pre-firearm days. They can serve as a spiny shield, protecting the leafy live parts of the plant below, for as long as they may last on their long peduncle.

Not that the leaves don’t have their own spines for protection, but additional weaponry positioned a few centimetres above the main defensive line is not to be sneezed at; also in plants that don’t suffer from colds.

Flying visitors are not deceived, the colour change to grey and brown convey a clear message that this is only a landing site for rest and observation purposes, no longer an eatery. No point in reminding the insect- and bird-brained clientele of the plant's whereabouts in anticipation of next season’s advertising campaign of the dining facilities. One has to know one’s customers and their limitations.

Sense organs of pollen and nectar consumers fortunately perform like GPS in the bush, unlike rooted plants that have no need to see where they are going or hear when someone’s coming.

Equipment you do not need tends to deteriorate from a waste to a burden, even a curse. Energy expended on growing body parts sans function is a deviation from parsimony, a waste that reduces the probability of achieving life's purpose of producing the next generation. Evolution takes its time but deals with waste.