Home » GENERA A » Arctotis » Arctotis revoluta
Back to Category Overview
Total images in all categories: 11,528
Total number of hits on all images: 6,611,399 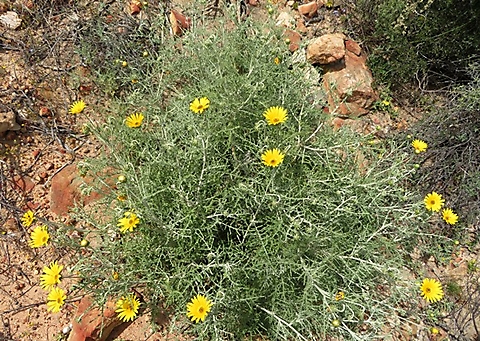 Arctotis revoluta, at some stage known as A. laevis, is a densely branched, soft-wooded shrub reaching heights from 50 cm to 2 m. The faint green-grey of the foliage in picture is broken by straight-line whitish stems and single, long-stalked flowers above the leaves.

The species distribution of this South African endemic is in the Northern Cape and the Western Cape, from Namaqualand to Saldanha Bay, strongly represented in the Clanwilliam area. The photo was taken in the Biedouw Valley.

The habitat is slopes and streambanks in sandy, often stony soils; a hardy plant. The species is not considered to be threatened in its habitat early in the twenty first century.

The plant features in coastal and fynbos horticulture and deserves to do so (Manning, 2007; Le Roux, et al, 2005; iNaturalist; http://pza.sanbi.org; http://redlist.sanbi.org).