Home » GENERA A » Arctotis » Arctotis revoluta erect bud near opening
Back to Category Overview
Total images in all categories: 11,635
Total number of hits on all images: 6,752,959 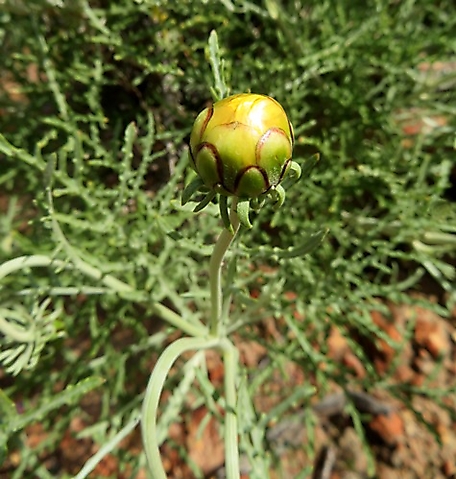 When the tip of the Arctotis revoluta bud becomes yellowish, it heralds opening as imminent. By now the florets inside have expanded sufficiently to lessen the grasp of the involucre on the outside.

Only the inner bracts still cover the florets. These innermost whorls of bracts are papery and transparent, divulging the colour of the ray floret outer surfaces, soon to spread when the break comes.

At this stage, however, the bud still to open, the peduncle stiffens and pulls its flowerhead up into the normally erect position of the open flowerhead. For this is the daisy flower stance, facing the sun and inviting insects to feast on all it has.

The peduncle in picture is still new to this position, a little wonky and not straight. Time is now of the essence, the bracts soon to part and the rays to spread (Manning, 2007; Le Roux, et al, 2005; iNaturalist; http://pza.sanbi.org).