Home » GENERA A » Arctotis » Arctotis revoluta flowerhead
Back to Category Overview
Total images in all categories: 11,635
Total number of hits on all images: 6,753,225 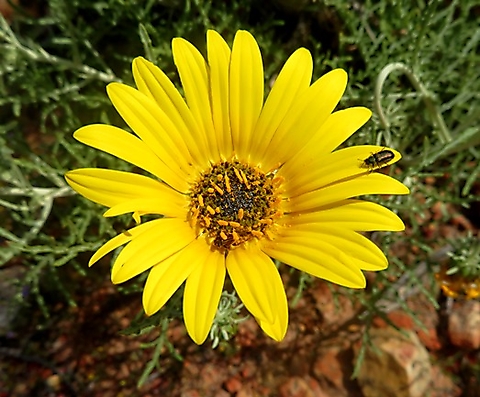 The flowerhead of Arctotis revoluta has between one and two rings of spreading yellow to orange rays around a dark, yellow or mixed central disc, depending on the opening of the bisexual disc florets.

Each narrowly elliptic ray has two slight, longitudinal channels dividing its surface nearly equally and almost joining at the tips that are bluntly pointed to almost rounded.  Pollinator landing facilities are friendly, the female rays curving down mildly near their tips, easy to negotiate by flying clientele.

The rays are sometimes red-brown to maroon on their outer, lower surfaces, sometimes on some of them only. Flowerhead diameter is from 4 cm to 6 cm.

Flowering happens late in winter and early in spring, sometimes throughout spring. The photo was taken in September.

The fruits are achenes, i.e. small, dry one-seeded fruits that do not open to release the seed when ripe. Each achene has two wedge-shaped cavities and some ribs. The pappus attached to the fruit consists of scales (Manning, 2007; Le Roux, et al, 2005; iNaturalist; http://pza.sanbi.org).