Home » GENERA A » Arctotis » Arctotis fastuosa orange flowerhead
Back to Category Overview
Total images in all categories: 12,068
Total number of hits on all images: 7,360,691 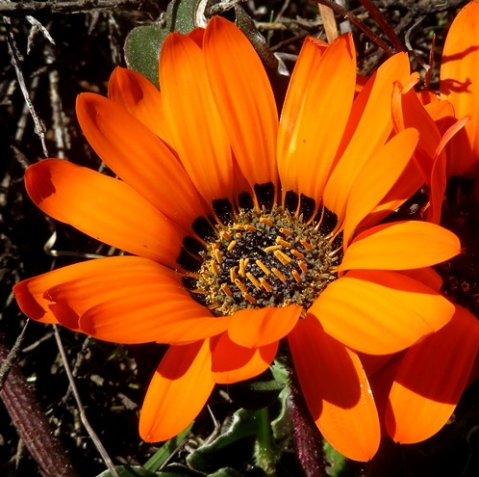 This Arctotis fastuosa flowerhead presents colouring that should warm the hearts of many Dutch people. It was seen in August on the Matjiesfontein flower farm near Nieuwoudtville, reminding of the 2010 FIFA World Cup when convoys of orange-draped vehicles crisscrossed the country en route to the martch venues.

The A. fastuousa ray florets with pointed tips that tend to curve in have black wedge-shaped marks at the base.

Cylindrical disc florets appearing to be pollen-laden are erect on the otherwise dark disc (Manning, 2009).