Home » GENERA A » Arctotis » Arctotis fastuosa
Back to Category Overview
Total images in all categories: 11,901
Total number of hits on all images: 7,142,169 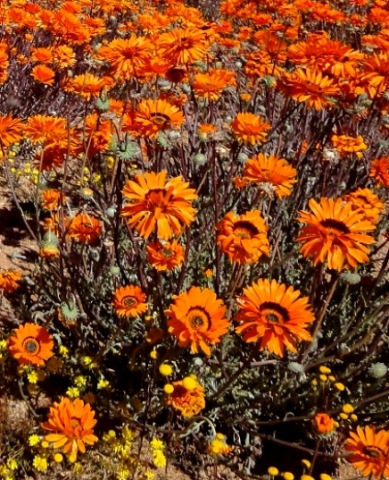 Arctotis fastuosa is a fast-growing, white-woolly annual that may exceed 45 cm in height after good rain. The soft herbaceous stems branch from the base.

The deeply divided, slightly fleshy leaves are hairy all over. Flowers are borne on long, erect, leafy stalks. The double whorl of orange ray flowers radiating out around the central disc is characteristic. The disc stays dark and shiny until its tiny flowers open, becoming yellow. The base of each petal in the upper row of ray flowers has a short dark purple section.

This species produces a fruit without a pappus and no basal hair-tuft. When ripe the fruits look like grape seeds. This happens about a month after flowering.

The species distribution is in Namaqualand in the west of the Northern Cape and slightly southwards into the north of the Western Cape.

The habitat is sandy and gravelly flats. The species is not considered to be threatened in its habitat early in the twenty first century (Manning, 2009; www.plantzafrica.com; http://redlist.sanbi.org).