Home » GENERA A » Arctotis » Arctotis auriculata leaves
Back to Category Overview
Total images in all categories: 11,635
Total number of hits on all images: 6,753,126 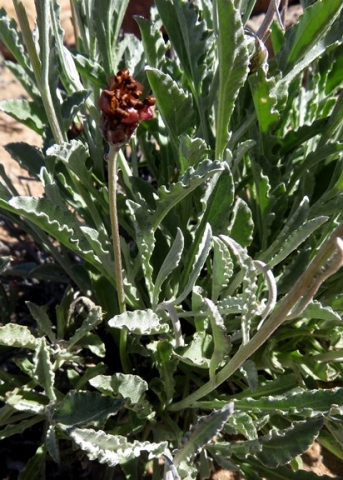 The long, narrow leaves of Arctotis auriculata are spathulate (spoon-shaped) to oblanceolate (inversely lance-shaped). The leaf is dominated by a sturdy stalk that becomes midrib to a pair of upturned blade halves forming a V-shape, sometimes a U-shape. The leaf arches down slightly from base to tip. Leaves become 3 cm to 5 cm long.

The leaf margins are wavy and irregularly lobed to coarsely toothed. The blade peters out towards the base into minor lobes where it gradually becomes the slightly channelled stalk. The leaf-tip is variable, undecided between rounded and pointed. The blue-grey to blue-green leaf surfaces are softly felted.

The specific name, auriculata (Latin) suggests that something of the plant is ear-shaped. A process of elimination leaves the leaves as the likely option, although any beast with ears like this might frighten many away.

Small stem leaves or baby ears alternate or spiral up the soft, hairy stems that are thickish, appearing soft in picture. These stems allow the plant to sprawl and achieve some height.

A brown, spent flowerhead is erect above the foliage, not yet ready to allow its seeds to disperse (Le Roux, et al, 2005; Bond and Goldblatt, 1984; iNaturalist).