Home » GENERA A » Arctotis » Arctotis auriculata flowerhead
Back to Category Overview
Total images in all categories: 11,635
Total number of hits on all images: 6,753,241 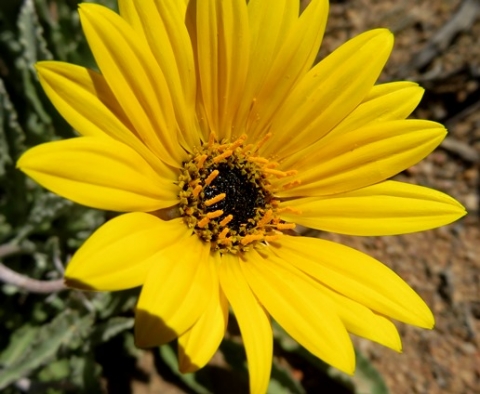 At its peak, the Arctotis auriculata flowerhead has a healthy ring of bright yellow or orange ray florets around its initially black disc where the wait of many buds will soon end.

The rays are elliptic, bulging next to two longitudinal pleats or channels along their upper surfaces. The pointed ray tips are notched or double-notched where the channels end. The rays are female. Flowerhead diameter is up to 5 cm.

Yellow colouring arrives gradually in the disc as the tiny florets on the outside of the disc start to open first, working their way inwards as long as resources last. Disc florets are five-lobed and fertile. Fertile in this context means a flower is bisexual, comprising viable male and female parts in each floret. Conspicuous cylindrical anthers are exserted above the open disc florets in the photo.

Flowering happens late in winter to mid-spring. The photo was taken early in August west of Springbok at a resort called Naries (Le Roux, et al, 2005; Bond and Goldblatt, 1984; iNaturalist).