Home » GENERA A » Anacampseros » Anacampseros namaquensis
Back to Category Overview
Total images in all categories: 11,549
Total number of hits on all images: 6,634,793 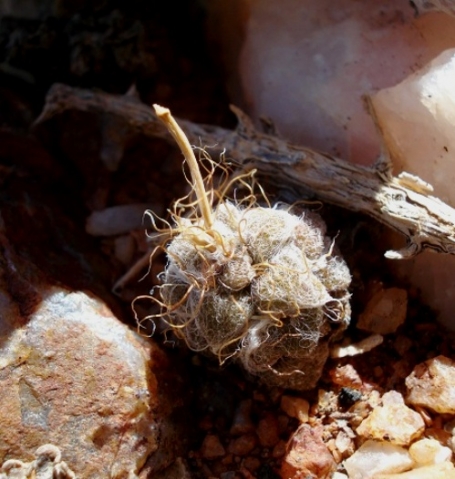 This Anacampseros namaquensis was photographed near Komaggas in the Northern Cape. It used to be called A. filamentosa subsp. namaquensis.

This is a comparatively tall plant for the genus, sometimes growing up to 15 cm, although many plants of only 3 cm will be found in habitat. The woolly, succulent, brown leaves form a dense clump, often becoming slightly cylindrical and branched. Long hairy and curling stipules that grow from the leaf bases may tower well above the leaves. A part of last season’s flower stalk still protrudes from the top of this plant.

The flower of A. namaquensis is five-petalled and pink, about 1 cm in diameter. Green pointed sepals form a protective calyx below the corolla that earlier enveloped the bud before opening. The flower holds a conspicuous central cluster of stamens with yellow anthers. The style is positioned in the middle of this cluster, the white acutely tipped stigma protruding above the stamens. Flowers arrive after the winter rain.

The plant is found widespread in parts of Namibia and southwards in the Northern Cape, the Richtersveld as well as Namaqualand that features in the specific name. The species is not considered to be threatened in its habitat early in the twenty first century (Williamson, 2010; http://redlist.sanbi.org).