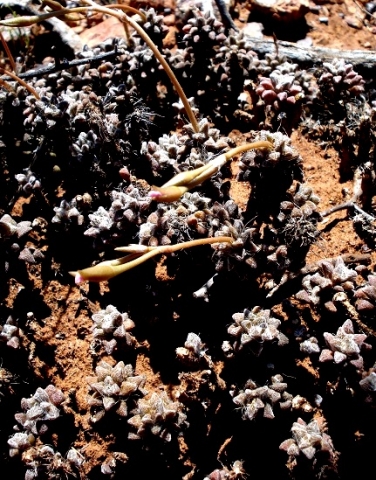 Anacampseros filamentosa subsp. filamentosa is a perennial dwarf leaf-succulent that grows prostrate branches into a leafy mat. The leaves are densely covered in white woolly hairs. The leaf shape is triangular and thickly succulent. Brown leaf colour shows through the hairs. This species is not considered to be under threat early in the twenty first century, as the plant population is currently stable.

Anacampseros is an interesting genus of small succulent plants with attractive flowers. The genus is endemic to southern Africa. It comprises 14 species and forms part of the purslane or Portulacaceae family. Anacampseros plants have long hairy leaf stipules, which stand taller, scattered above the general white woolliness on the leaves. The plants are often found in semi-shade of bigger shrubs. Flowering happens shortly after rain, therefore in the rainy season of the species distribution.

Besides A. filamentosa subsp. filamentosa there are two further recognised subspecies, viz. subsp. namaquensis and subsp. tomentosa (as if the other two are not woolly enough).

The distribution of A. filamentosa subsp. filamentosa lies diagonally across inland South Africa, from the Eastern Cape, the Free State to North West and Northern Cape (Smith, et al, 1997).