Home » GENERA A » Anacampseros » Anacampseros arachnoides
Back to Category Overview
Total images in all categories: 11,401
Total number of hits on all images: 6,175,179 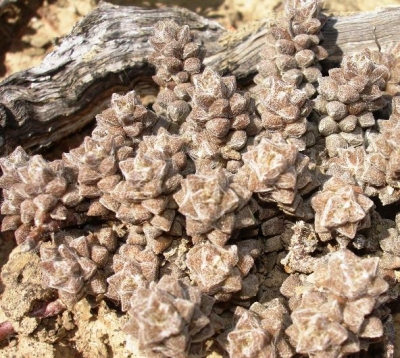 Previous
Image 3 of 32
Next

This dwarf succulent is commonly known in Afrikaans as haaskos (hare or rabbit food) and botanically as Anacampseros arachnoides.

Haaskos has white flowers, tinged with mauve or pink, borne about 8 cm tall. The flowers are seen in summer, opening in the afternoon.

It occurs naturally from Worcester in the Western Cape and eastwards across the Little Karoo, the Great Karoo and on to Uitenhage and King William's Town in the Eastern Cape; possibly also in parts of Namaqualand.

The habitat is Nama Karoo, succulent Karoo and Albany thicket, mostly quite arid land. The western part of this region receives its rain in winter. The species is not considered to be threatened in its habitat early in the twenty first century (Frandsen, 2017; Bond and Goldblatt, 1984; http://redlist.sanbi.org).