Home » GENERA A » Anacampseros » Anacampseros albidiflora
Back to Category Overview
Total images in all categories: 11,506
Total number of hits on all images: 6,493,895 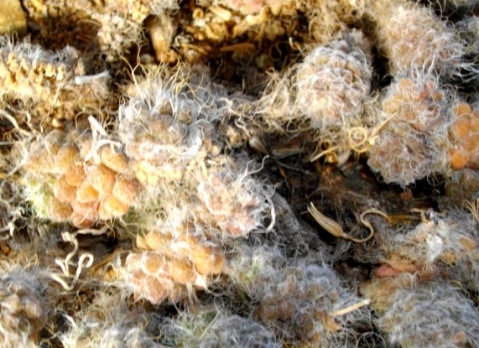 Previous
Image 1 of 32
Next

Anacampseros albidiflora is a dwarf perennial, a leaf succulent growing to about 10 cm when in flower. One to a few white or cream flowers, sometimes with a slight pinkish tint grow on a branched stalk from the stem tip. The flowers are bisexual, opening for a few hours in bright sunlight. Blooming happens in late spring and summer.

This South African endemic is found mainly in the Western Cape, particularly the Little Karoo, slightly into the Northern Cape Karoo and also into the Eastern Cape to Steytlerville.

The plant grows on arid, stony slopes, often under shrubs or among rocks. From habitat adaptation its needs include well-drained soil, much sun and little water. The species is not considered to be threatened in its habitat early in the twenty first century.

This plant was previously known as A. newbrownii (Shearing and Van Heerden, 2008; iSpot; www.redlist.sanbi.org).